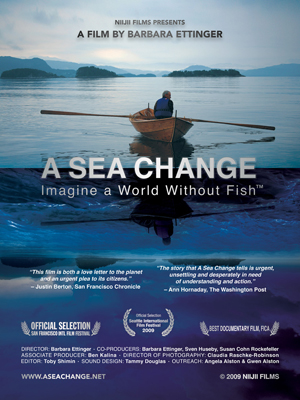 Barbara Ettinger is an award-winning documentary filmmaker whose work includes
Martha and Ethel, which premiered at the Sundance Film Festival in 1995, Two Square Miles, which was broadcast on PBS and chronicles a grassroots battle against the incursions of a multinational cement plant, and most recently, A Sea Change. This film tackles the immense and under-reported environmental issue of ocean acidification, which threatens the very survival of our ocean ecosystems. The story is told through the moving tale of a grandfather, Sven Huseby, his grandson Elias, and Sven’s round-the-world quest to learn what must be done to preserve the oceans for future generations. A Sea Change was broadcast on Discovery’s Planet Green channel and has enjoyed a wide release through screenings organized by community groups, non-profits and educational institutions worldwide. When not busy at work making films Barbara might be found on the tennis courts, behind her still camera or out walking with her two dogs and her husband Sven.